WE DECLARE A STATE OF EMERGENCY ON HOUSING AND WE DEMAND EMERGENCY RELIEF. 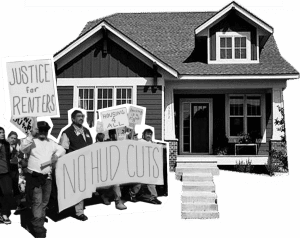 The nation's housing crisis has reached emergency levels. A person working full time, paid minimum wage, cannot afford a two-bedroom apartment in any county in the United States. More than half of all Americans spend over 30 percent of their income on rent and utilities. Twelve million households dedicate over half their wages to housing.

This recent crisis has reached a breaking point 10 years after big banks devastated American wealth. American families lost $16 trillion of their wealth in the 2008 financial crisis. Millions of people, particularly African Americans and Latinos, lost their homes and their life savings. Ten years later, those who have recovered wealth are disproportionately white and upper class, while several million people of color and working people remain underwater.

Instead of meeting the challenges of the crisis, Congress has just voted for a tax scam that will only exacerbate the situation for low-income and working class communities and communities of color. The tax scam will harm millions of the lowest income seniors, people with disabilities, families with children, veterans and other at-risk populations in need of federal support to keep a roof over their heads. This state of emergency demands emergency action from Congress.

We demand the following relief package:

Our nation’s shameful legacy of excluding whole communities from generational wealth endures in the wealth gap. Any attempt to address the current housing emergency must rectify the wrongs of generations of housing policy, especially to black and brown households.

GUARD AGAINST THE NEXT CRISIS.

It is not enough to right the wrongs of the past or to simply reinvest in existing housing. We must be prepared for another crisis of similar scale to the 2008 recession. We must also consider the implications of current and future climate crises on housing.

We know that the housing crisis has breadth and depth. But there is also a lot we don’t know about who is impacted and where. Any plan to comprehensively move a progressive housing agenda must begin with strengthening a real, people-centered assessment of need.