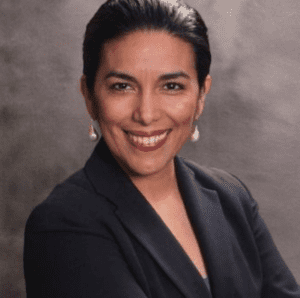 Sulma Arias is the new executive director of People’s Action Institute and People’s Action, a national network of state and local grassroots organizations dedicated to fighting for justice and helping communities take control of their destinies – or what we call “power-building.” Arias is also the first Latina immigrant to lead the two organizations.

At a time when more than half the member organizations of People’s Action are led by women of color, with the underpinnings of democracy itself under threat, Sulma Arias is the right leader to bring the power of organizing to bear on the future of all people seeking a hand in their own destiny.

In taking on this role, Sulma is coming home to the network, having previously served as the lead for immigration and worker justice at National People’s Action, one of three organizations that merged in 2016 to become People’s Action.

Arias has been organizing on the ground, training organizers, engaging in strategic planning and directing organizations for more than 20 years. This includes leading the country’s largest coalition of grassroots immigrant rights groups with Community Change, organizing in Kansas with Sunflower Community Action – and, once before, working with People’s Action – on a range of issues that includes healthcare, payday loans and worker justice. While on staff at National People’s Action between 2008 and 2011, she also helped develop and launch our Long-Term Agenda.

Sulma’s approach to leadership and organizing for political and economic power is rooted in her personal story. When she was a child, her best friend took up arms, only to be killed in the civil war that tore apart El Salvador, her birthplace, for more than a decade. By the time she was 12, she and her four siblings were mostly raising themselves. She crossed the Texas border at 13 with a niece and nephew who were both less than half her age.

In her new home of Wichita, Kansas, Arias immersed herself in the Bible, and the church. In her twenties, religious studies led her to discover liberation theology. This interpretation of the Bible, which addresses inequality and oppression and underscores the "wisdom of the poor," inspired her to search for something more.

Ideas in liberation theology brought back memories of El Salvador’s civil war over economic justice, human rights and other issues. She thought of her best friend, Chato, and the other boys and men from her town who went to war. “I realized, ‘Oh, so this is what they knew. This is what the fight was about,'” she recalls today.

In late 1999, Arias came into organizing when Laura Dungan, founding director of Sunflower Community Action, needed an interpreter to help knock on doors in Wichita’s Latino community.  Dungan was mentored by Shel Trapp, one of the founders of National People’s Action, and has deep connections to People’s Action. Trapp went on to train Arias. Within months, Sunflower hired Arias to organize Latinos in Wichita.

In 2010, Arias’s deep experience in the Black and Brown communities of Kansas made her the ideal leader for a campaign centered on spreading the word about the policies of Secretary of State Kris Kobach targeting immigrants and voters from marginalized communities. These policies ranged from a voter ID law based on the false idea that undocumented immigrants were voting fraudulently, to voters being kicked off rolls due to a verification system riddled with errors.

Throughout the campaign against Kobach's policies, organizers reached more than 100,000 Black, Brown and poor white voters who hadn’t been going to the polls, helping them become more involved in local and state politics. The campaign also left an impact on organizers, many of whom went on to lead other grassroots efforts or to run for office in local elections.

Kobach continued peddling his ideas in Kansas and beyond, leading the Trump administration’s ill-fated Election Integrity Commission – which shut down in eight months, unable to produce evidence of voter fraud in the 2016 presidential election. But in hindsight, the policies Arias and her team exposed were early signs of what was to come: a nationwide assault on democracy, mostly on the state level, touching everything from the number and location of absentee ballot boxes, to who gets to count votes. We are living through nothing less than a full-scale attempt to maintain political and economic power in the hands of white men tied to one political party.

In Kansas and elsewhere, Arias has approached her decades of grassroots organizing with what she calls a “warrior” mentality deeply rooted in the social movements of Latin America’s history. This includes maintaining “resilience,” a quality that is developed from withstanding tragedy and learning that the struggle for justice and equality is continuous, and not tied to winning or losing a particular election, or campaign.  Her approach to organizing and building people power draws not only on the resilience of human beings, but on the joy that comes from work worth doing.

“Good organizing,” Arias says, “radically transforms people and changes their lives forever – like it did mine.”