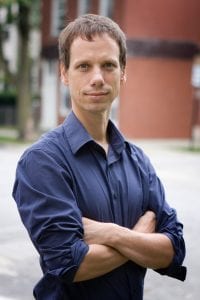 His successor is Sulma Arias, a national leader in the fights for immigrant and worker justice. Click here to learn more about Sulma.

Click here to read a personal message from George, and here for a letter from our boards, about this transition.

Thank you, George, for all you have done for People's Action!

At the age of 21, George Goehl walked into a soup kitchen to eat. Over time, he became an employee – first washing dishes and eventually helping run the place. Three years into his time there, he was struck by seeing the same people in line for food as when he first arrived. It was in this moment that his focus shifted to the root causes of poverty, and George began to organize.

In the wake of the financial crisis, George and National People’s Action mobilized more people into the streets to demand accountability than any other organization, helping win Dodd-Frank Financial Reform,  create the Consumer Financial Protection Bureau, and secure mortgage relief for hundreds of thousands of families.

For 15 years, George led People’s Action, one of the largest multiracial poor and working class people’s organizations in the country.  He is credited with moving the field of community organizing to new levels, increasing emphasis on shaping worldview, building independent political power, and focusing on long-term vision and strategy.

Under George’s leadership, the organization also spearheaded the most robust, race-conscious, rural organizing effort in the United States. People’s Action  completed tens of thousands conversations with everyday people in rural communities across the country, bringing people together around divisive issues like immigration and climate change, and delivering decisive vote margins in states like Pennsylvania, Wisconsin and Michigan during the 2020 general election.

George is a leader in transforming the field of community organizing to increase relevance to emerging social movements, building electoral power in states, and winning structural change that shifts the balance of power to working class families.

The New York Times, The Washington Post, The Guardian, CNN, MSNBC and others have covered George’s organizing work. He has written for The Guardian and The Nation.

Originally from southern Indiana, he is a husband, father, banjo player, and makes documentaries about country music.

George Goehl in the news:

Why Is This Happening: Organizing in Trump Country with George Goehl (Interview with Chris Hayes) NBC News

What if the Left Wins? A Q & A with George Goehl  The Nation

How Scapegoating Immigrants Hurts All Workers  The Nation