Garcia has pledged to enact the LUCHA and People’s Action Protest to Power Platform and promote a bold racial and economic justice agenda. LUCHA members are confident that Garcia will lead Arizona’s working families into a bright future with prosperity for all – not just the wealthy few.

People’s Action will back dozens of candidates in 2018 for governor, congress, legislature, and municipal offices who, like Garcia, will move our country forward, not backward.

“LUCHA is proud to endorse David Garcia for Governor. Garcia is not a politician, he is a leader. He knows what it means to struggle and because of that he understands that in order to build the Arizona we want, we must include all our communities in solving the issues impacting our daily lives.” – Armida Vargas, LUCHA member

“David Garcia represents the type of candidate that Arizona deserves and needs. His connection to his Arizona roots, his military service, and dedication to all families, prove that he will govern with inclusivity, equity and a desire to ensure that every Arizonan is heard. LUCHA is proud to endorse David Garcia and we ask every Arizonan to do the same.” – Tomas Robles, Co- Director of LUCHA

“LUCHA is proud to endorse David Garcia. David represents the values and vision that Arizonans deserve, one that prioritizes families and builds the future Arizona where our families will thrive. Arizona wants and deserves a leader who will move us forward.” – Alejandra Gómez, Co-Director of LUCHA

“David Garcia is the new face of leadership in Arizona, and around the country. He brings bold, inclusive ideas that appeal to new, young and diverse voters. He represents the next wave of massive political change in Arizona as communities move from protest to power. Our endorsement of David Garcia is just the beginning of a broad slate of People’s Action candidates nationwide who will work for the people and our planet, not billionaires and wealthy corporations.” – Mehrdad Azemun, Campaigns Director, People’s Action

“People’s Action organizations are working in Arizona and across the country to build a Movement Politics that relies on people power to defeat concentrated wealth and advances candidates from our movement – working class people, especially women and people of color – who are bold, not bland. We are proud to endorse strong candidates like Garcia, who embody our vision and our values.” – Ryan Greenwood, director of Movement Politics, People’s Action

“Receiving the support from LUCHA tells me our campaign is on the right track. These amazing leaders are committed to making sure Arizona is focused on working families and not simply serving those at the top. LUCHA is rooted in the community but they also know how to win statewide.

I couldn’t be prouder to stand with them in this fight. Our campaign, along with organizations like LUCHA and their national affiliate, People’s Action, are ready for the fight ahead. We are ready to make sure the days of corrupt politicians serving their wealthy and corporate donors and ignoring the rest of us are over and in its place will come an Arizona that has good schools, access to doctors when folks get sick, good paying jobs and a chance at a future.” – David Garcia, Democratic candidate for Governor

Living United for Change in Arizona (LUCHA) is a dynamic, membership-led, grassroots organization, building power with Arizona’s working families to advance social, racial and economic justice for all. Through leadership development, grassroots campaigns, advocacy and civic engagement, we seek to create an Arizona in which every person enjoys equal rights, opportunities and protections. 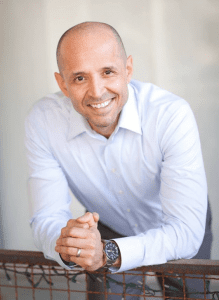 David Garcia is a kid from a West Mesa neighborhood whose dad was a commercial painter and Vietnam-era veteran. His mom juggled parenting along with a job at an electronics factory to help make ends meet and still lives in the home where David was raised.

David married his high school sweetheart, Lori, a fellow Mesa High Jackrabbit. Together, they have two daughters Lola and Olivia who attend our public schools. David has a soldier’s sense of duty. At 17, he enlisted in the U.S. Army Infantry. His time as an infantryman instilled values that guide his life to this day: discipline, accountability and duty. He is the first in his family to finish college.

After graduating from the Honors College at Arizona State University, David received a masters and doctorate from the University of Chicago and has become a nationally-recognized expert in education research and policy.

In 2014 he led the Democratic ticket in votes and came within a half-percent of being the only Democratic statewide elected official in Arizona. Now, he is a professor in the Mary Lou Fulton Teachers College at Arizona State University where he teaches research and policy to Arizona’s next generation of leaders.